What is LSD ?
It stands for Limited Slip Differential, avoid using that acronym when talking with mom or non car guys.

Why i need it in my life ?
– It’s really useful in mud and snow.
– It makes the car really easy to control while sliding or drifting.
– It makes the U-turns fun and spectacular.
– On a drag race, during power starts and up-shiftings one of the wheels might slip. LSD will prevent this so you won’t lose time.
– By buying and installing a LSD, you are adding “S209A LIMITED SLIP DIFFERENTIAL” to your car’s options list. That Increases the car value.
– DONUTS !
– Massive burnouts with both rear wheels (and/or clutch if you’re not experienced enough)

Attention : Everything on that article except the testing and recognizing of a LSD is valid only for the EU market.
There is a difference between EURO and US diff lockers. 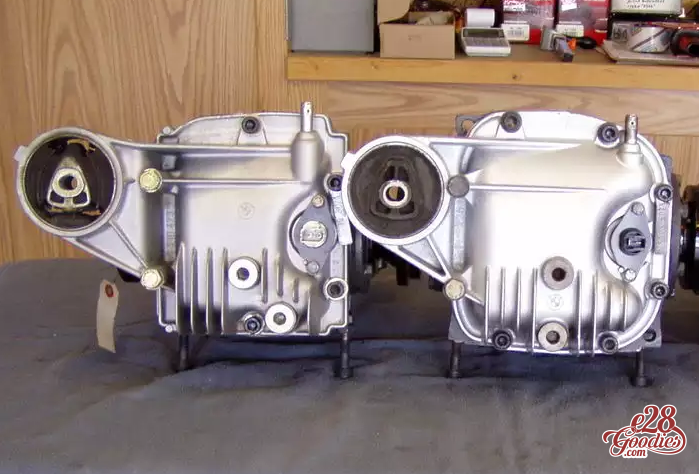 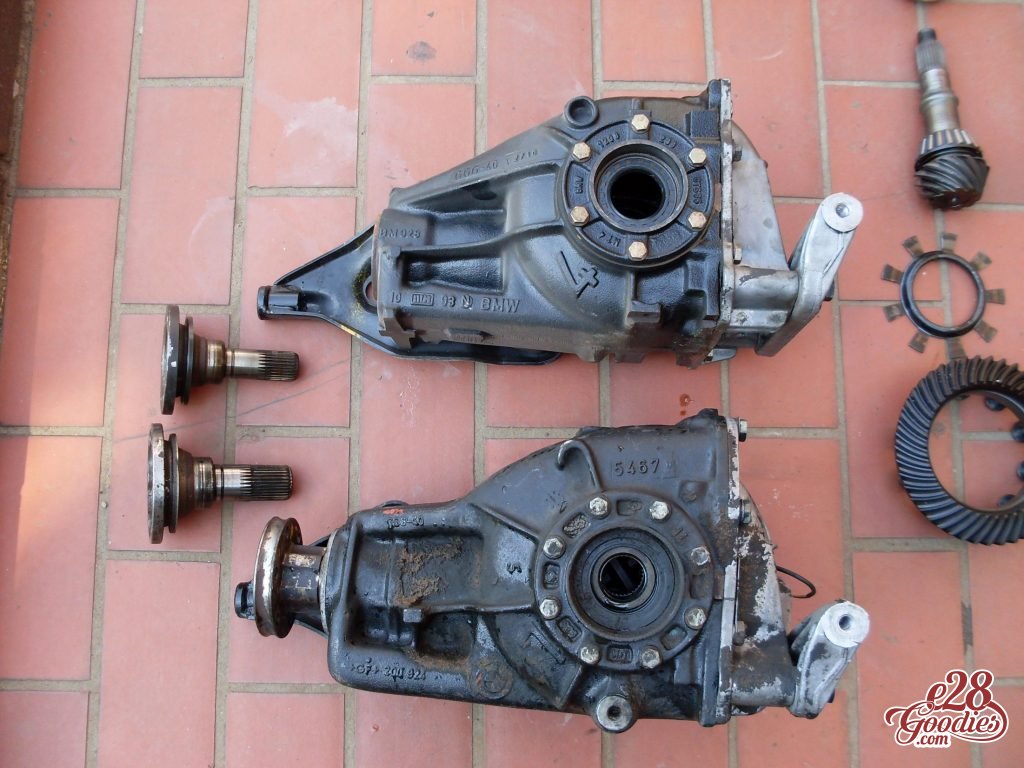 A same type diff from another e28 is a straight bolt on, except the difference in the back cover.  (Both covers are interchangeable.)
– before 84′ – for center mounted round bushing. 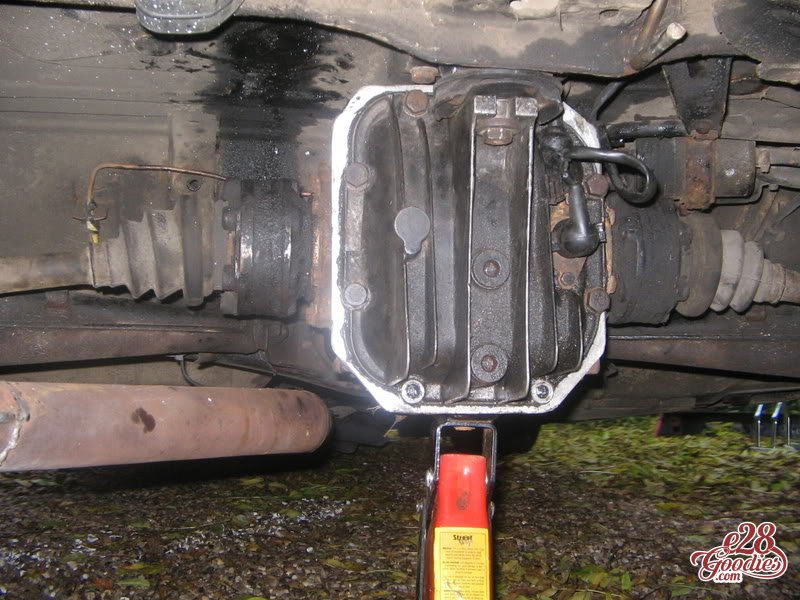 – After 84′ – square bushing, it’s mounting point is shifted slightly to the left 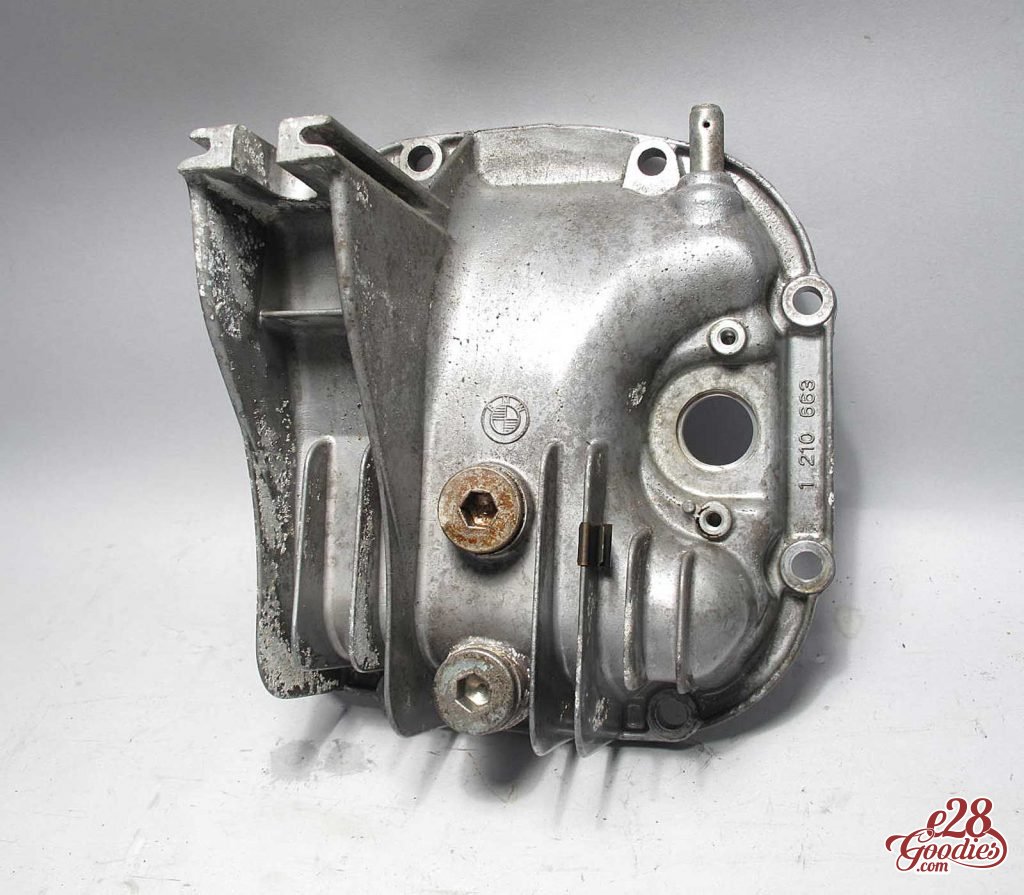 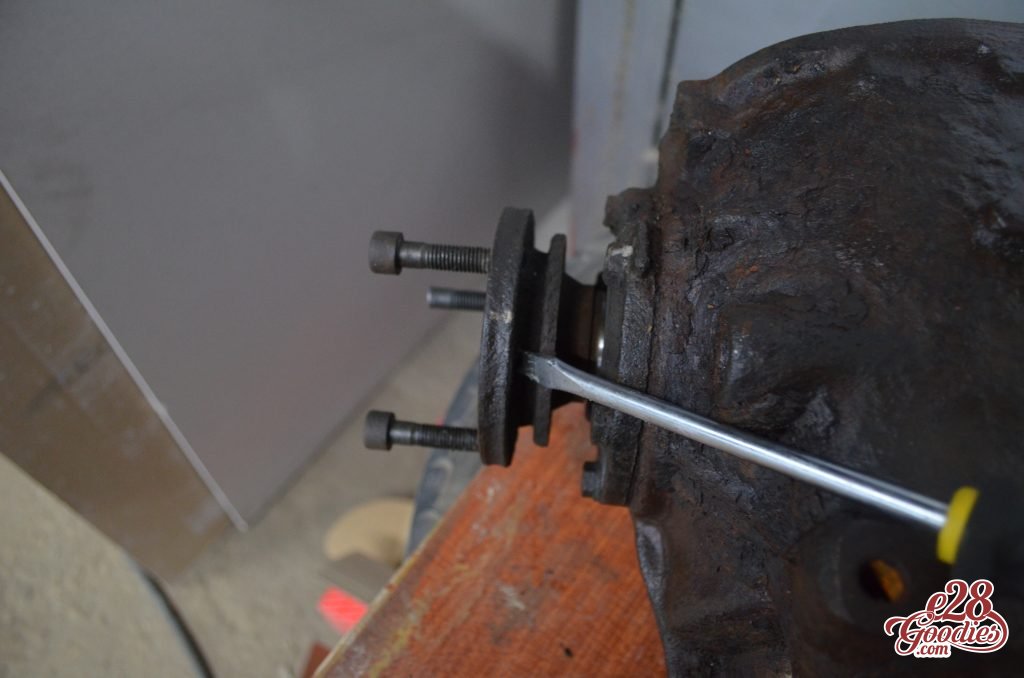 The possibility of using differentials from different cars offers a ton of gear ratio options
Find the one that suits you best by using our gear calculator.

We did a brief research over the web, about some popular ratios and where they might be found.
We cannot confirm if that’s 100% true, but it might give you some head ups. Also there are few other gear ratios. Here are the results: 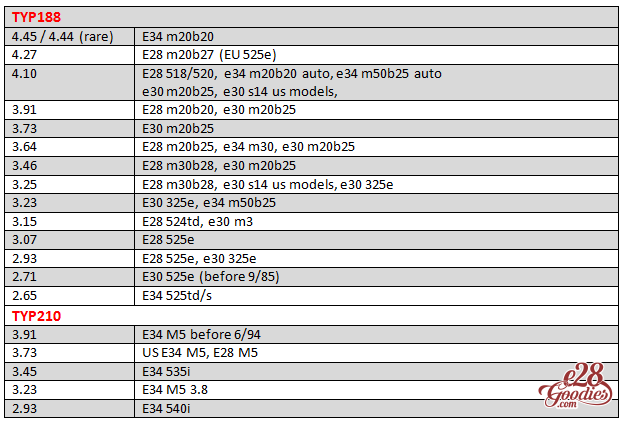 How you can recognize a LSD just by blink of an eye?
There are couple signs:
– There is a big “S” stamp ( Sperrdifferential ) somewhere on the case – usually on the top (shown on an e32 casing).
Picture is used only for visual representation of the look of the “S” stamp on BMW LSD.

– There is a small gear ratio tag attached to one of the bolts of the back plate which should contain the leter “S” before the gear ratio. 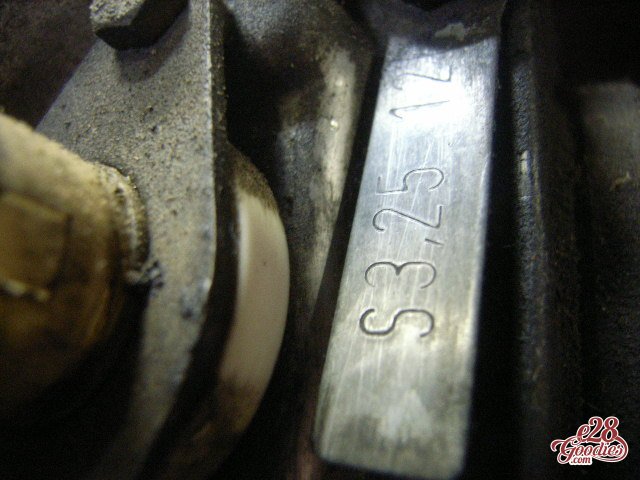 If the differential is still on the car there are also two options:

(Not recommended, because of reasons)
– Find wide and open space, full lock (left or right) , put on 1st gear, hold the clutch, 5k rpm, release the clutch and you should do an instant donut.
Make sure you are making difference between a smokey donut (LSD) or pathethic understeer accompanied by tyre squeeking (open diff).

(Recommended)
– Put on neutral, disengage the handbrake, lift one of the rear wheels off the ground and try to spin it.
It should be really hard to do this with the tyre on and almost impossible if you are trying to spin just the brake disk/drum.

Field testing.
In my case i got a differential on a killer price. I was looking for typ188 S2.65 out of a diesel e34 and found it just few kms away from work.
The deal sounds too good to be true, but i went prepared with tools.

So the seller presented me this.
(You will be able to replace your e28 diff with e34 one ONLY if it looks like this – 4 mounting holes on the top.)

Dirty, muddy and rusty diff case. If you got the same – don’t worry. Sandblast it and spray it. It will do the work.
Don’t powdercoat it, because that will bake off the flange seals.

I’ve tried to rub the dirt off the top just to see the “S” stamp, but it was faded away.The ratio tag was missing.

There shouldn’t be any noises coming off it.
Diff shouldn’t stuck or become harder or softer to spin at some point. It should rotate smoothly.
Then shake all of the three flanges, just to see if there is play in the bearings. Should be close to none.
Observe for leakages around them (or the whole case looking ‘moist’) – a clear sign for a shot seal/s. 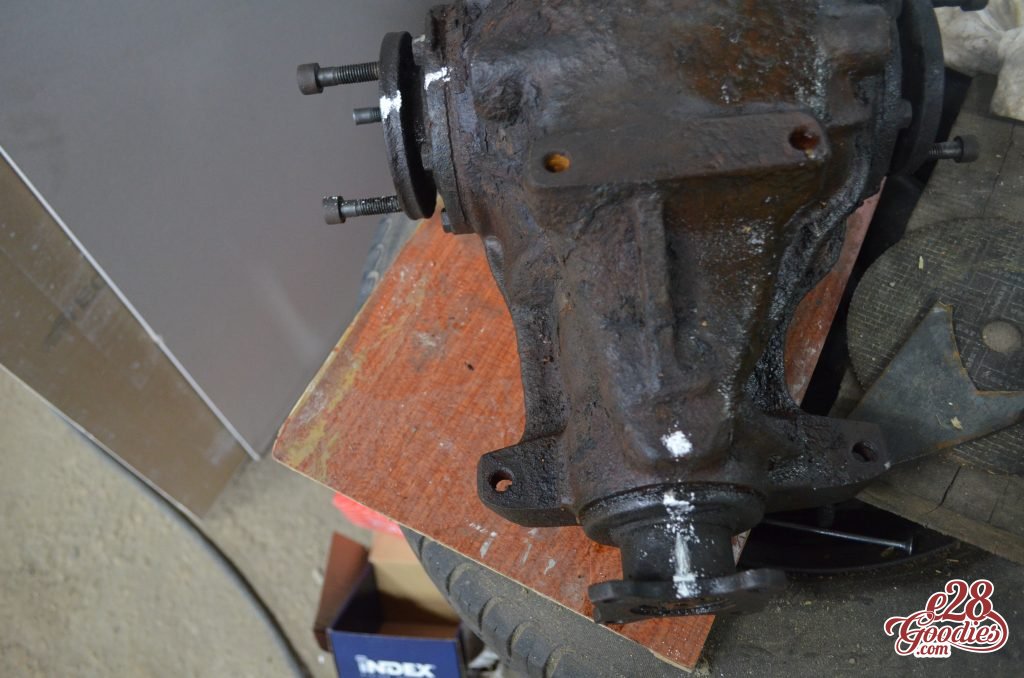 Put two bolts on each side of the wheel flanges, so they could lock the metal rods.
Push one of them forward while trying to pull the second one backward making the differential to slip. 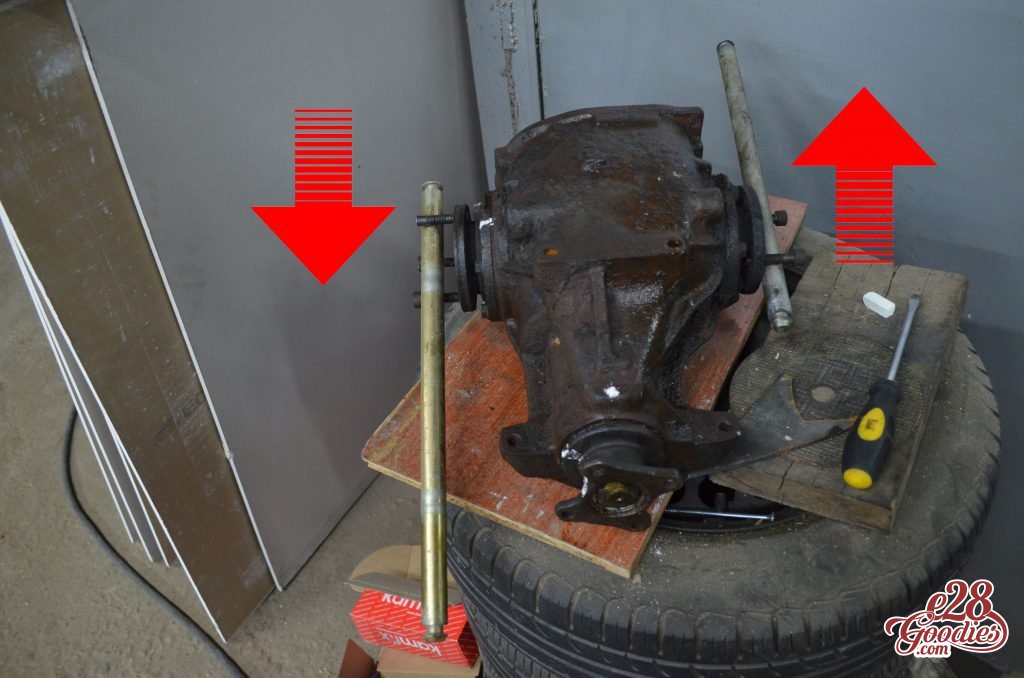 It should be really hard to do so.If it’s easy, the friction discs are more likely to be worn out.
We’re having some sets in stock, but this is a major reason to negotiate over the diff price.

Remove the cover (17 mm socket) and inspect inside.

Oil has to be clear.
Silver shavings or oil reminding of a metallic silver paint are really bad signs of worn out pinion or crown (or both) gears. Whole metal chunks are the worst.
Deal breaker for sure, since the metal residue is damaging the gears and the friction discs and that sounds like complete and expensive rebuild. 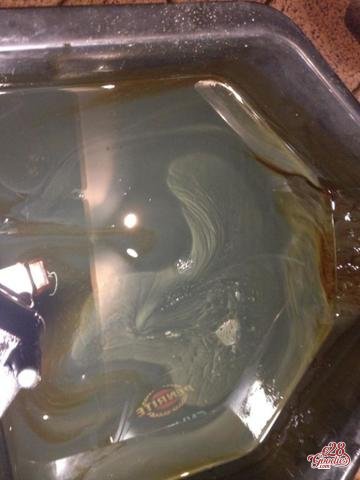 Inside walls of the case should be black and clean, there shouldn’t be any rust. 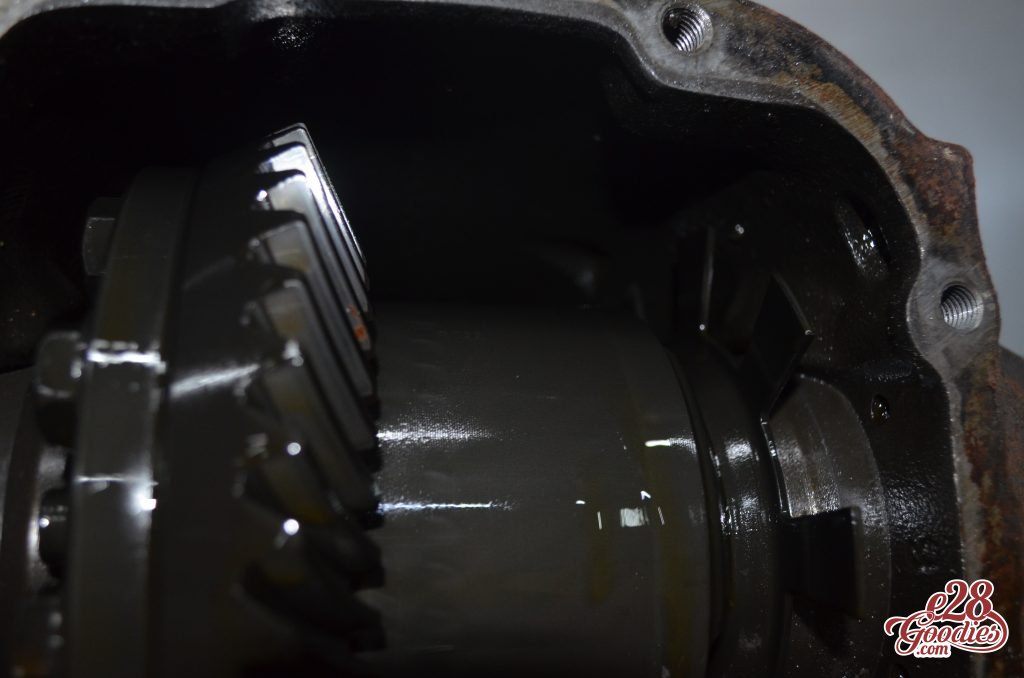 Put the diff straight up the driveshaft flange, and start rotating the whole case. 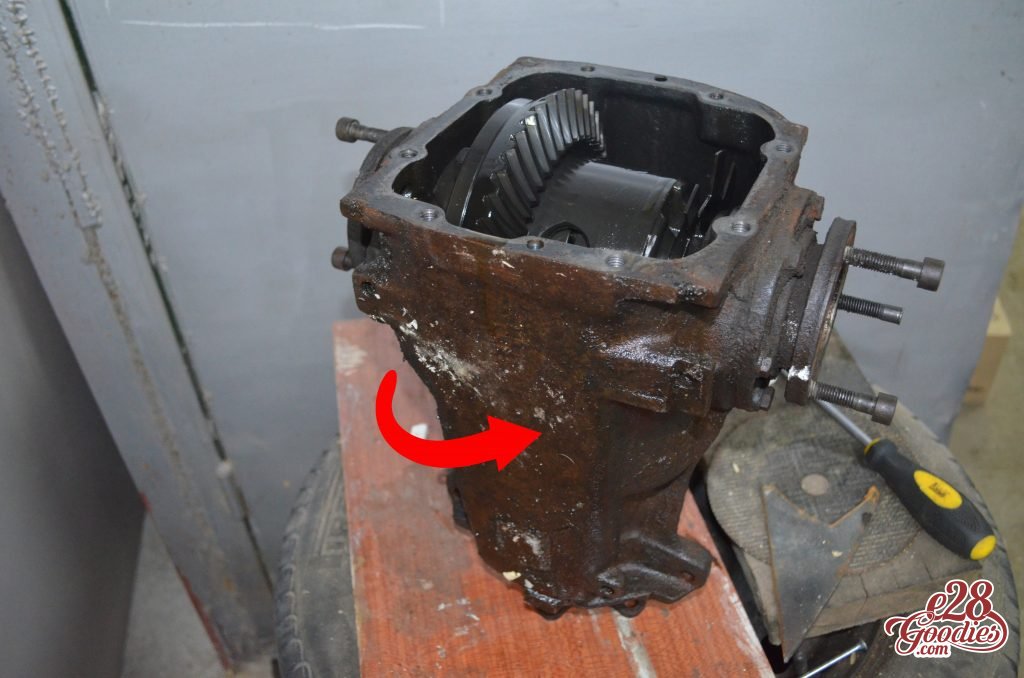 You will see pinion gear (underneath) and crown gear (left) spinning. Observe the teeth on both of them for damages, scratches, parts missing or wear. Although any irregularities on the gear surfaces will not necessarily hinder the diff’s function, they will make noise at greater speeds that some people may find irritating.

Congratulations – you are ready to become a boy racer.

P.S/N.B!  –  If both wheel flanges are spinning only in the same direction and you find it impossible to slip the diff with the rods, make sure the diff guts inside don’t look like that !!!
It’s not a LSD , it’s dogshit.

We’ve sourced some of the pictures from Google.
We really appreciate the effort of their authors.

Credits to Shawn Doughtie & Michael Burroughs for letting us know US e34 diff might fit e28 only under some circumstances.